The National Museum of Organized Crime and Law Enforcement (The Mob Museum) is located in downtown Las Vegas in the former Federal Court and US Post Office Building. Construction began on the building in 1931, and the building was dedicated on November 27, 1933. Getting its start in 1905, Las Vegas is still a young city, so by local standards it’s a very old building, so much so that it’s listed on the National Register of Historic Places.

The original museum opened in 2012. In 2016, LGA was selected to renovate the first floor and basement levels of the museum to create a Speakeasy, Distillery, expanded retail and food experience, a Crime Lab exhibit, a Use of Force experience, and rework all first floor exhibit areas to create a more contemporary exhibit area. The project opened in spring, 2018 to great acclaim, interest and attendance.

The project started with an assessment of the existing facility to determine if the facility could be modified to achieve the intended use. LGA prepared conceptual plans and through our team member Chattel Associates coordinated meetings with the local Las Vegas Preservation Commission Office and the State Historic Preservation Office (SHPO). We reviewed the previous historic structures report to determine the opportunities and constraints of the project from a historic perspective. From the conceptual design and meetings, a budget was prepared for the project to be used for fundraising.

After The Mob Museum obtained funding, LGA was retained to prepare detailed design and construction documents for the project. LGA suggested that a project of this complexity would benefit from having a Construction Manager at Risk (CMAR) on the team and assisted the museum in obtaining proposals and selecting a CMAR.

LGA and the CMAR worked closely to develop a design and phasing plan where the museum would be open at all times. The first floor was sectioned off giving patrons access to exhibits and a small retail area while the renovation was taking place. Once the new retail area was completed, the existing exhibits were taken off line while this area was renovated. During the first phase of work, the basement interior was demolished to allow for feeding utilities from below. New restrooms were constructed as well as the upstairs kitchen that required plumbing extensions from below. Once the first floor was completed and the new attractions were open, the basement level was completed.

LGA created the new Speakeasy, Distillery, and Kitchen facilities in the basement of the building. Adding to the complexity of the project was that these areas were also interpretive exhibits and spaces to educate visitors about the United States Prohibition Era. The entry to the Speakeasy is themed as an alleyway with a hidden entrance behind a false storefront of a drug store, similar to the way many Speakeasies were concealed.

The Distillery contains crates and bottles that were actually used in the non-legal production of spirits. Whisky, rum, vodka, and moonshine are produced on site and sold in cocktails from this period of time at the bar. The bar contains interpretive displays and historically accurate finishes, glassware, and cocktail menu. In additional, a secret room has been provided located behind a hidden door painting, once again recalling the hidden rooms found in Speakeasies.

The first floor was renovated to add an expanded combination retail, food, and exhibit area complete with new restrooms and deli counter. The existing exhibit area was renovated to create a new Crime Lab exhibit complete with forensics education area autopsy room. A new Use of Force exhibit was added whereby patrons are taken through an active shooter situation and taught law enforcement techniques using state of the art training equipment. In addition, a new interactive exhibit was created that highlights current organized crime stories throughout the world. Gallagher Associates was the Interpretive Planner and Exhibit Designer on the project.

The building is served by an existing boiler and chiller system. In the basement, we added new efficient fan coil units to distribute airflow to the new spaces. The first floor building HVAC system was redistributed in the renovation. New LED fixtures were added to all renovated spaces and zero VOC finishes were used throughout. 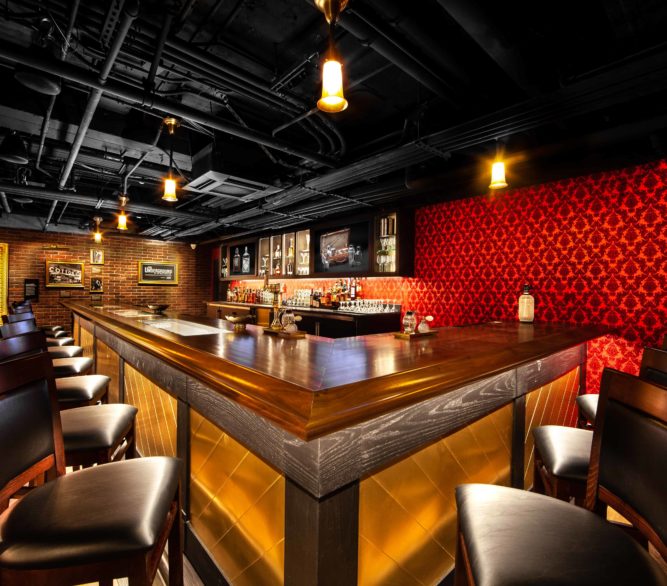 LGA contracted a historic structures consultant to augment our team for this important project. Chattel Associates assisted the team through reviewing the project with the Las Vegas Historic Preservation Commission and the Nevada State Historic Preservation Office (SHPO). While we were making only minor exterior changes to the project, there were historical features within the building that needed to be maintained. In the new retail area, there is a historic lobby complete with finishes and a pendant light fixture. This area was kept intact and the retail displays were integrated seamlessly into the space with care given to not attach to the historic finishes. In addition there were historic ceiling elements that were located within the use of force training area. We created a beam system that extended below this ceiling that allowed us to suspend lights and equipment and maintain the integrity of the historic ceiling element. The lone exterior improvement was to add a ramp to the existing building dock. Working closely with the Preservation Commission and SHPO we were approved for the ramp, which uses a cable railing that was compatible with the railings of the existing building.

There were significant safety considerations with this project. First and foremost, the basement was not originally used as an assembly area for the public. We needed to upgrade the second stair for the building to meet the current code and at the same time provide an area of refuge for people who could not access the stairs in the event of an evacuating event or fire. These improvements needed to be completed on the interior of the building to not affect the historic nature of the building. In addition, we needed to upgrade the fire classification of the distillery because we were producing and storing alcohol. At the same time, the client wanted a movable glass wall between the Speakeasy and the Distillery. Working closely with the City of Las Vegas Fire Prevention Department, the approved solution was to create a water wall with sprinklers located on each side of the glass wall to meet fire requirements.