Opportunity Village is a not-for-profit organization serving children and adults with intellectual disabilities (OVIP) in the Southern Nevada community. Its mission is to enhance their lives and the lives of the families who love them. Opportunity Village is dedicated to helping people become the very best they can be. Through vocational training, community employment, day services, advocacy, arts and social recreation, citizens with severe disabilities are able to find new friends, realize future career paths, seek independence and community integration, and unleash creative passions.

The master plan for the campus addresses the goals, needs, and challenges of the Oakey Campus of Opportunity Village. Central to the concept is a new front arrival and departure experience for clients, complete with a new inviting entry sequence.

Clients who take transit services will be dropped off under a shaded canopy located onsite at the corner of Oakey Boulevard and Community College Drive. A one-way loop drive will be created to separate transit traffic from other vehicles. Clients who are dropped off by parents will access the site from Oakey Boulevard where short-term parking is provided and a safe travel route has been created to the building. The Welcome Center provides ample places for OVIP’s to wait for pick-up as well as a small tour assembly area and space for parents to relax and connect with Opportunity Village.

The entry to the Magical Forest has been enhanced and several new shade structures have been added to create connections to the program areas and to provide shade throughout the campus. 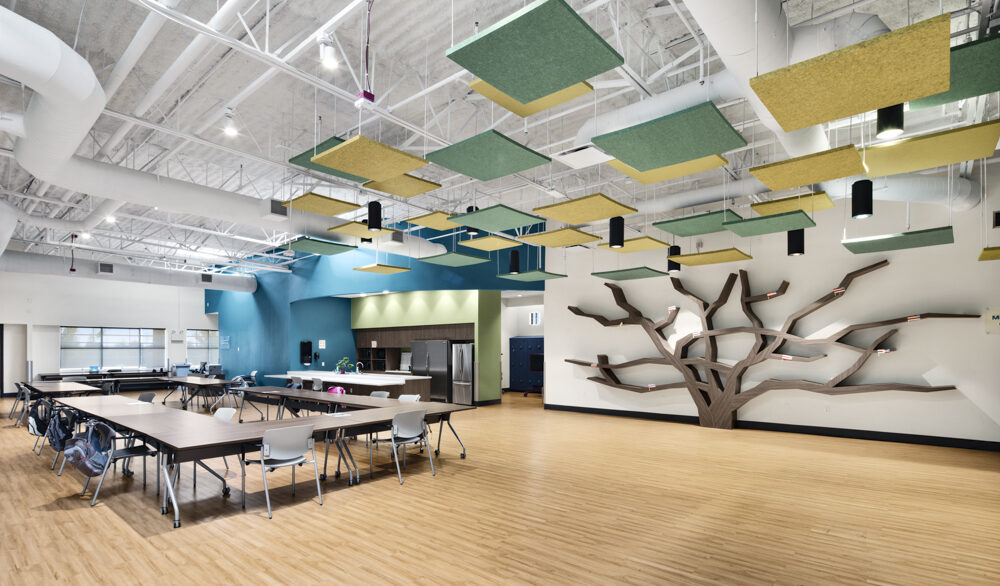 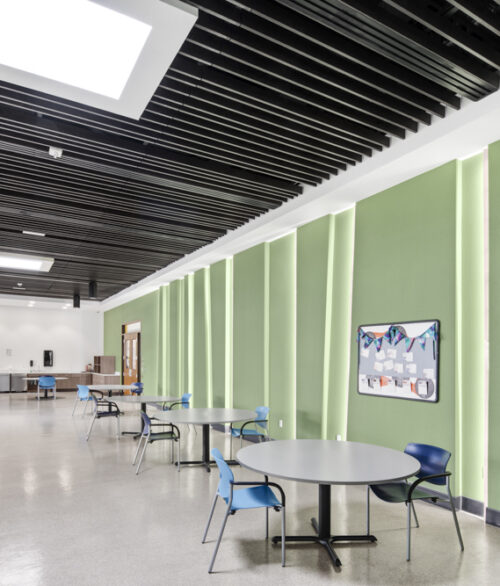 The Oakey Campus is known for the Magical Forest, which is built upon a North Pole and Santa Claus theme. Opportunity Village wanted LGA to integrate the theme of the North Pole into the program areas and entire campus.

LGA’s solution was to key upon the magic of the North Pole, particularly the Aurora Borealis or “Northern Lights.” The design team felt that nothing captured the magic of Opportunity Village better than the Aurora Borealis, which is a naturally occurring phenomenon that revolves around the Magnetic North Pole. The Aurora occurs when highly charged electrons from the solar wind interact with elements in the earth’s atmosphere. Solar winds stream away from the sun at speeds of roughly one million miles per hour. When they reach the Earth some 40 hours after leaving the sun, they follow the lines of magnetic force generated by the Earth’s core and flow through the magnetosphere, a teardrop-shaped area of highly charged electrical and magnetic fields. As the electrons enter the Earth’s upper atmosphere, they encounter atoms of oxygen and nitrogen at altitudes from 20 to 200 miles above the Earth’s surface. The color of the aurora depends on which atom is struck and the altitude of the meeting.

LGA’s use of the Aurora Borealis is a metaphor for the magic that Opportunity Village creates for its clients and the community of Southern Nevada. What better backdrop to the Magical Forest than the naturally occurring Northern Lights?

The concept creates a beacon of hope and a physical demonstration of the magic of Opportunity Village.