For more than six years, Ward 1 Councilwoman Lois Tarkanian harbored a vision of a new pool facility where the many families in the Ward 1/Garside community could gather together for fun and fellowship, as well as a welcome break from the scorching desert summers. Finally, a financial agreement with the City of Las Vegas was reached to fund the new construction in exchange for including public city access to the future facility.

The existing pool at Garside Junior High School was originally built in 1971, and was in desperate need of an update for use both by its parent school and as a community recreation area.

The previous groundwork laid by Tarkanian had already garnered a high level of public interest and city staff involvement, but the details of the design remained elusive. LGA was asked to step in and help.

Several years of thoughts, approaches, iterations, phasing and planning had already been invested by the time LGA joined the project. However, LGA felt immediately at home working with Garside, since both LGA President Craig Galati and City of Las Vegas Project Manager Mike Vlaovich attended Garside Junior High themselves. 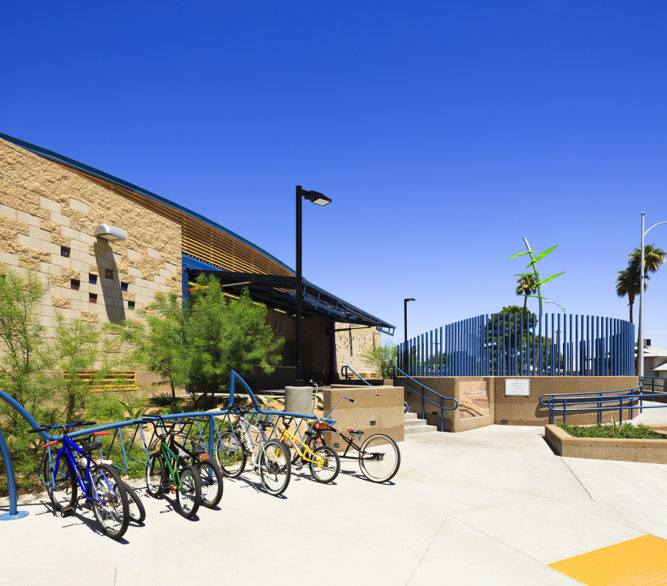 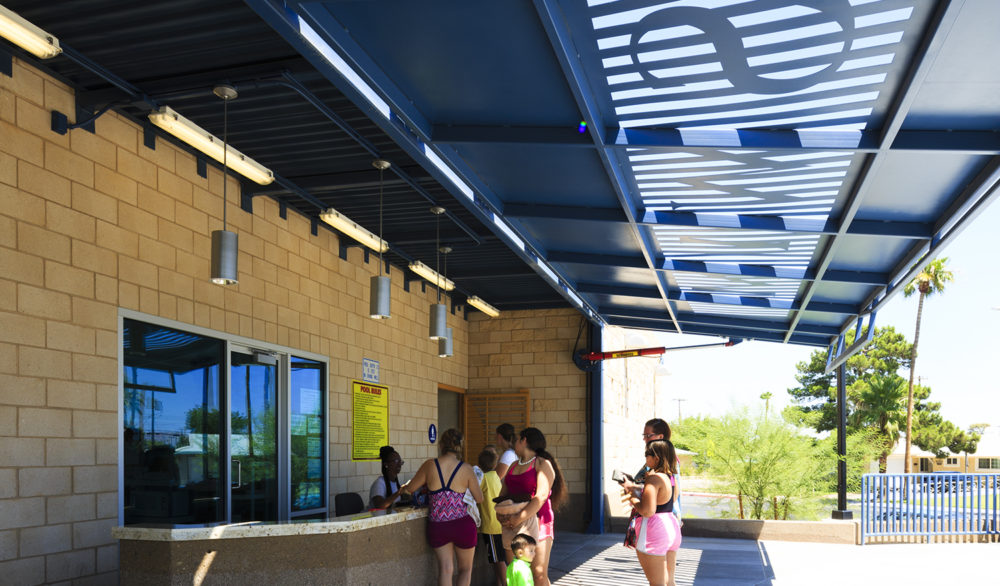 The design portion of the project began in early 2012, and Councilwoman Tarkanian hosted the groundbreaking ceremony on June 25, 2013. The project was completed by May 2014.

One of the challenges of this project was handling the technical aspects of the physical design drawings. LGA called upon the experts at Aquatics Design Group to assist with this portion of the project and include their voice of experience.

Another challenge was to incorporate a lap pool area to be used for competitive and fitness swimmers, as well as a splash pool and play area, while ensuring a comprehensive flow throughout the facility. New locker rooms would also have to be designed and built, all housed within the 3,600-square-foot area set aside for the structure.

LGA carefully studied comparable projects, finding inspiration in their best and most innovative qualities and fine-tuning them for use at Garside. The final design exceeded expectations, and may provide a future model to use in similar projects.

The locker rooms are not the usual open-air structures typically found at pool facilities. Instead, LGA reconfigured the changing rooms, retaining the open-air concept to naturally ventilate the building without the need for air conditioning, yet meticulously tweaking the basic design to limit the amount of dirt and debris that is carried in. This allows for a deliberately low maintenance level to reduce janitorial costs, all while improving the overall appearance.  In fact, the hallmark LGA emphasis on meaningful aesthetics is visible all the way from the parking lot; the entry area ramps up to a central plaza that includes a working waterplay feature, with embedded fossils highlighted in the concrete, telling the geological history of Nevada’s past. Nevada’s geology is further emphasized by embedded fossils revealed throughout the foundation and retaining wall of the locker rooms. The locker room entrance door resembles an ichthyosaurus skeleton to carry on the prehistoric theme that weaves throughout the facility.

The real central point of the project, however, focuses on the water features. The former single pool will now evolve into three distinct, yet interconnected, areas: lap, recreational, and splash pool.

The recreational pool will include a play structure with a smaller open slide, water spray elements and a tipping bucket, and gradually slopes from fossil-themed mosaic at the zero-depth entry point to a maximum depth of 2’-6” where it adjoins the lap pool.

The lap pool has four dedicated lanes for swimmers, and includes a one-meter diving board. Pool depth ranges from 3-6” at entry to 12-6” depth at the diving end. The lap pool then transitions to the splash pool, which features a constant 3-6” depth and is home to two tube slides sloping down from a single tower.

LGA maintains its reputation for combining outstanding design aesthetics with an eye toward sustainable design at the new Garside Pool Facility. We incorporated the use of reduced energy bulbs and fixtures throughout the area, and also used a multi-staged pumping system to lower environmental impact and utility costs. An additional option was given for the future installation of solar-thermal panels in the parking area.

More than just a standard pool upgrade, LGA delivered a concept rooted in our long-held vision: that communities should be able to enjoy a fun, exciting and engaging environment that integrates elements of the area’s geological history with an eye toward preserving the landscape of the future.